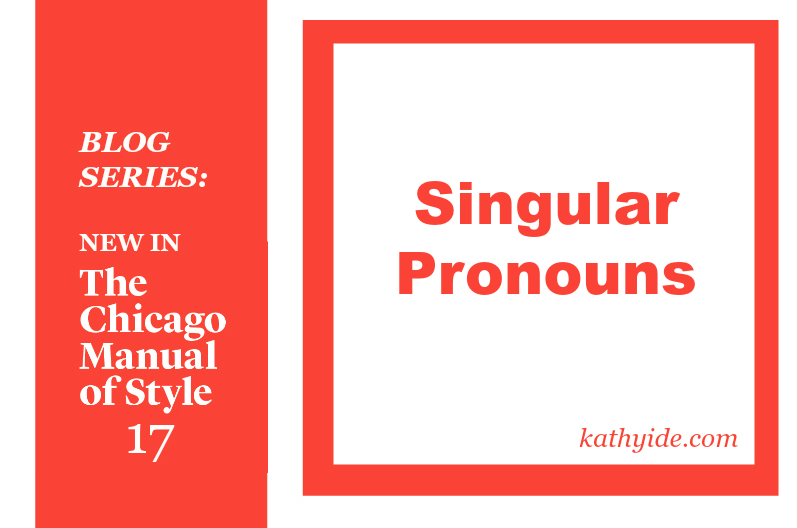 I’m pleased to know that the new 17th edition of The Chicago Manual of Style has not, to my knowledge, affected the accuracy of the PUGS section of my Proofreading Secrets of Best-Selling Authors. However, there are some things I want to pass on to my followers.

I blogged about some punctuation additions and changes the previous two weeks.

There are two Usage guidelines that are important for authors and editors to know about … and they’re controversial issues for some!

Normally, a singular antecedent requires a singular pronoun. But because he is no longer universally accepted as a generic pronoun referring to a person of unspecified gender, people commonly (in speech and in informal writing) substitute the third-person-plural pronouns they, them, their, and themselves. While this usage is accepted in those spheres, it is only lately showing signs of gaining acceptance in formal writing, where Chicago recommends avoiding its use.

Like singular you, singular they takes a plural verb. So when the context requires it, they/them/their/theirs, like you/your/yours, can be used to refer to one person. Examples:

The generic singular they was endorsed in 2015 by the editors of the Washington Post, though with a caveat to first try avoiding it if possible.

Traditionally, the only gender-neutral third-person singular personal pronoun in English is it, which doesn’t refer to humans (with very limited exceptions). Clumsy artifices such as s/he and (wo)man or artificial genderless pronouns have been tried—for many years—with no success. They won’t succeed. And those who use them invite credibility problems.

Indefinite pronouns such as anybody and someone don’t always satisfy the need for a gender-neutral alternative because they are traditionally regarded as singular antecedents that call for a third-person singular pronoun. Many people substitute the plural they and their for the singular he or she. They and their have become common in informal usage, but neither is considered fully acceptable in formal writing, though they are steadily gaining ground. For now, unless you are given guidelines to the contrary, be wary of using these forms in a singular sense.

This advice applies mainly to generic references, where the identity of the person is unknown or unimportant.

I’d love to hear what you think about these new Usage guidelines.