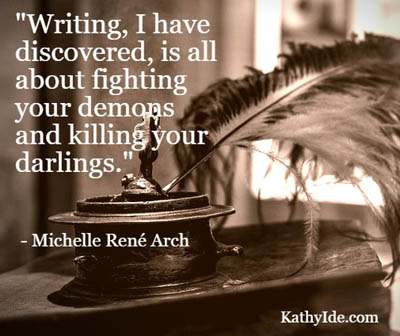 A warm welcome to my guest blogger this week, Michelle René Arch, who understands the arduous journey we take as writers.

After six years in Chapman University’s dual MA in English and MFA in Creative Writing program and twelve semesters of writing workshops, conferences, and purposeful study of the craft of writing, I have debunked any notion that existed in my mind that writing is a peaceful, innocuous, inner journey of the soul. Naïve pre-graduate-school images of my writer self stretched out on a blanket in the cool grass, the tip of a pen resting on my lip while I read the long, rambling passages I’ve just written and marvel at the poetic poignancy and gilding of my own prose and the ease with which it was conjured and articulated, are recalled now for mere hilarity. Writing is a violent, scything, and arduous enterprise of the psyche, like the deepest, darkest session on a therapist’s couch.

In On the Art of Writing, professor and novelist Sir Arthur Quiller-Couch admonishes those of us with a tendency to focus too much on ornamentation and style: “Whenever you feel an impulse to perpetrate a piece of exceptionally fine writing, obey it—wholeheartedly—and delete it before sending your manuscript to press. Murder your darlings.”

I’ll never forget the first time (or the eighth time) a writing instructor advised me to kill my darlings. We had just workshopped a chapter of my novel, one with which I was particularly pleased and which, I can admit in retrospect, was chock-full of “darlings”—words and images of adornment that I believed were critical to the work’s merit. Kill my darlings? My professor may as well have asked me to feed my childhood stuffed bunny into a wood chipper. Back home at my desk that night, I began the relentless slayings, highlighting and deleting adjectives, adverbs, and darling after darling until there was nothing left of any real interest. And then it hit me. Oh. I see. There’s nothing here of any real interest. That moment of revelation is when the demons pounce.

Novelist, playwright, and screenwriter William Goldman elucidates this moment perfectly: “Writing is finally about one thing: going into a room alone and doing it. Putting words on paper that have never been there in quite that way before. And although you are physically by yourself, the haunting Demon never leaves you, that Demon being the knowledge of your own terrible limitations, your hopeless inadequacy, the impossibility of ever getting it right. No matter how diamond-bright your ideas are dancing in your brain, on paper they are earthbound. If you’re trying a screenplay, you know it’s never going to be Bergman. If it’s a novel, well, what kind of a novelist can you hope to be when Dostoevski was there before you. And Dickens and Cervantes and all the other masters that led you to the prison of your desk” (Adventures in the Screen Trade: A Personal View of Hollywood and Screenwriting, 1983).

A new image of my writer self standing on my desk chair and brandishing a scythe at my demons and darlings has supplanted the gentle authorial life I had envisioned previously, but I’m growing to like it more. “You were never promised that a writer’s training would be easy,” Quiller-Couch reminds us. Besides, if the screenwriting genius Goldman, who has written some of the most acclaimed cinematic works of our time, including Butch Cassidy and the Sundance Kid, All the President’s Men, A Bridge Too Far, The Princess Bride, Misery, and Chaplin, has an inadequacy demon, then at least I’m running with the right crowd. I’m guessing we all are.

Michelle René Arch earned a master of arts in English and an MFA in creative writing from Chapman University and is the recipient of the 2015 Tom Massey Award for Outstanding Dual Degree Student. She also holds a master of business administration and a bachelor of arts in theatre and English from California State University, Fullerton. She is the recipient of three awards for fiction writing and is a member of the Association of Writers & Writing Programs and American Christian Fiction Writers. Arch is a regular nonfiction contributor to the online arts journal TreeHouse and the ACFW website, and her columns have appeared frequently in the Orange County Register. She is currently seeking representation for her first novel.

« What Are You Afraid Of? » Promising Beginnings Winner