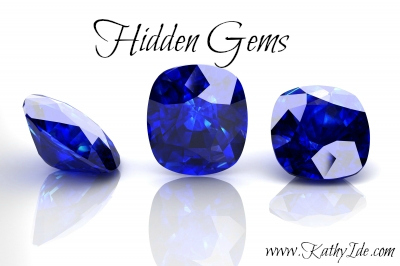 “Oh, no,” I groaned from the backseat of the car. “I lost a benitoite.”

I stared at the ring on my right hand, which—last time I checked—had two royal-blue stones in it. The forefinger of my left hand caressed the empty setting. “It’s one of the gems Rick dug out of the ground for me. Sort of.”

Years ago, my husband and his brother-in-law had gone on a mine dig near San Diego. While his sister, his niece, and I enjoyed Sea World, the men spent all day in the hot sun, bent over tailings from buckets of dirt in the hopes of finding rocks that could be made into gems. Afterward, we visited a woman in the area who faceted such rocks and turned them into jewels.

On their first dig, Rick had dug up enough tourmaline to make me a three-gem ring and a single-stone necklace. Their second attempt hadn’t produced large enough pieces of benitoite to facet. But my thoughtful husband had asked the gem cutter if she had any bits of it available. Turned out she had two, left over from a large stone, that would be just right for a ring. When Rick offered to buy me whichever one I wanted, I couldn’t decide between the two, so he got me both.

And now, one was gone.

My heart sank at the loss. Not because of the monetary value, even though the California state gem is rather rare. The sentimental value was far greater to me. This wasn’t just a jewel. This was a piece of my husband’s heart, which he’d given to me after a full day of back-breaking labor. And I’d lost it.

I searched every inch of the backseat I could reach. Back home, I emptied my purse all over the kitchen counter. Called the movie theater we’d just come from, but only got a recording.

While giving my goddaughter a bath, I prayed. God, I have no idea where that gem is. But You do. Lord, please guide me or Rick to exactly where it is. Acknowledging that sometimes what we want isn’t in God’s perfect plan, I added, “And if we don’t find it, please let Meg have an extra benitoite for us.” Option 2 wasn’t near as appealing. Even if she had something, getting it would cost time and money, both of which were in rather short supply.

As I toweled off my goddaughter, I asked her if she would pray about my missing gem. Sitting on my lap, still wrapped in the towel, she immediately folded her little hands and closed her eyes, then prayed a sweet, confident, faith-filled prayer.

After she went home, my husband and I stood in the kitchen, staring at the contents of my purse, which were still strewn all over the white counter. While I ran my hand over every inch of cloth in every section of my purse, Rick’s eyes went back to scanning the blue carpet, as he’d been doing during Zoe’s bath.

He bent down and picked up something. As he placed it in my palm, my heart leapt for joy. “That’s it! You found it!” I turned it over and over, gazing at it from every angle. “Oh, thank you, honey! And thank You, God!”

“Sure, give Him the credit,” my agnostic husband murmured with a wry grin.

I wrapped my arms around his neck. “You said yourself we had no way of knowing where I might have lost it, that it could be anywhere. But God knew. And He led you right to it.”

The next morning, I contemplated the tasks on my schedule for the day. I thought about the fiction-lover’s devotional I’ve been working on. I have received several wonderful submissions from talented writers, and I have to pick twenty for the first book in the series, 21 Days of Grace: Stories that Celebrate God’s Unconditional Love.

“God,” I prayed, “You know which submissions would fit this project best. You know which ones would most bless the people who are going to read this book. Help me to find the authors and stories You want me to include. Lead me to the right gems to put into every book in this series.”

Do you have a short fiction story in your mind or on your computer? Don’t leave that lovely jewel hiding in the dark. Dig it out. Facet it till every aspect of it shines brilliantly. Then send it to me. It might just be the jewel I need to fit one of the books in my series.

Image courtesy of Boykung at FreeDigitalPhotos.net.