This is the final segment of Lori Freeland’s guest blog. Click here to read parts 1 and 2.

I have a secret. I am pitch-challenged. I suffer from a gut-wrenching, chill-producing, chokehold case of pitch-a-phobia.

You may be laughing, but I know my career could take off or topple based on my ability to get my manuscript out there. And before you judge, try summing up ninety thousand words in one sentence and then tell it to a stranger who is looking for any excuse to shoot you down.

A few years ago, I sat in a seminar taught by super-agent Steve Laube. He was amazing. Knowledgeable. Brilliant.

And scary. At least to me. 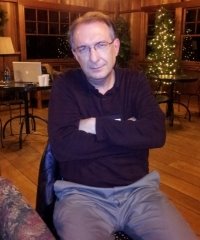 Steve’s “Scary” LookHe set his standards skyscraper high. You’d better know your stuff, learn your craft, dig in, and do the work before you sent him a query.

Right then, I vowed I would never pitch to Steve Laube.

Guess who was at Mount Hermon … taking pitches?

But that was okay. ’Cause I wasn’t pitching to anyone there.

See, I’d found a way around the whole sit-across-from-a-stranger-and-try-not-to-puke encounter. I became the Contest Queen. Agents and editors judge the final round in larger writing contests. And bonus—your work remains anonymous until the judging ends. If those judges like what they see, they’ll request the full manuscript. If not, nobody knows who you are. No in-person bumbling required. By the time I went to Mount Hermon I had a bunch of contest wins under my belt.

A few of the writers and faculty at Mount Hermon stayed up late in the lounge every night talking craft and war stories. One of them was Steve Laube. I confessed to him my pitch-a-phobia … and my Steve-a-phobia. I told him I’d vowed never to pitch a book to him because I’d vomit on his shoes before I got the words out.

Kathy Ide sat next to me during the conversation and suggested I pitch to him. After a few stumbled tries and a ton of um’s, Randy Ingermanson jumped in to save me. He pitched my book to Steve. He did a great job too. But I still didn’t have the nerve to actually ask the great Steve Laube if I could send him a proposal … until Kathy practically forced the words out of my mouth. And guess what? Steve said yes.

I learned that I need to be able to talk about my book. After all, if I got published, what would I do if I did an interview? Or a book signing? Or a speaking event? And what would I say to my readers? Turns out getting an agent or publisher is the easy part.

And guess who’s not as scary as I thought?

We even took a picture together. And shared a meal. Actually, he’s pretty hilarious. And sweet too. But don’t tell anyone. It will ruin his hard-guy image.