Breathing Life into Your Word Train 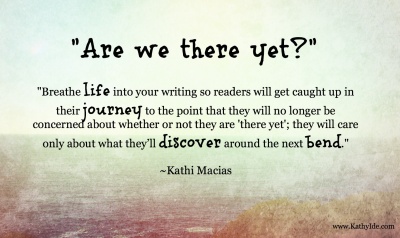 The 2005 film titled “Are We There Yet?” was supposed to be a comedy, but as a parent and grandparent who has heard that infamous “Are we there yet?” question a gazillion times, I can easily relate to the frustrated adult who is driving those squabbling, pint-sized terrorists across the country.

“That’s because she was looking at me!”

“Am not. And stop putting your leg over on my side!”

Sound familiar? It does if you’ve ever ridden in a car with passengers under the age of thirteen. (Once they’re teenagers it gets worse!) But what, other than the obvious sibling rivalry, causes such annoying behavior? Personally, I think it’s boredom, plain and simple. Kids do not want to spend a lot of time confined in a car, regardless of their destination. So if it’s a lengthy journey, you’d better be prepared to entertain them along the way.

Readers are much the same way. If they find themselves on a long, boring ride, they want one of two things: to get off at the next stop, or to get to their destination as quickly as possible. And to be truthful, it doesn’t matter how expertly we’ve constructed our “word train” (a visual tool I often employ to teach writing—see my writers’ workbook, The Train-of-Thought Writing Method). If the ride is boring, the readers just want out. Therefore, to prevent mass defection, we must make sure our journey doesn’t get boring.

So how do we do that? We add an observation car to our train, an element that will breathe life into our word train and enable our readers to get caught up in their journey to the point that they will no longer be concerned about whether or not they are “there yet”; they will care only about what they’ll discover around the next bend.

If you’ve ever ridden on a train you know all the passenger cars have windows, and if you have a window seat you can see outside. But your view from these cars is limited. The observation car is different. It is specifically designed to enable passengers to see as much scenery as possible, with glass on both sides and even overhead, and with the seats arranged so that everyone in the car gets a great view.

Suddenly the long, boring ride is much more entertaining. Why? Because the passengers can see what’s going on—in front of them, beside them, above them, and behind them. Without these added dimensions, the ride quickly becomes flat and unappealing. The same is true of our writing, regardless of our destination. What good is breathtaking scenery if no one can see it?

Imagine taking a train ride in a passenger car with no windows. The conductor stands at the front of the car, reciting from memory the passing scenery over a loudspeaker. The passengers may accept the fact that they’re riding through the redwoods because that’s what the conductor is telling them, but how much more effective would it be if they could actually see the majestic giants?

That’s the difference between show and tell. Would you prefer that someone tell you there are trees outside, or would you rather have someone open a window and show them to you? The age-old writer’s maxim of “show, don’t tell” is good, solid advice, but simply sprinkling your work with a few more adjectives and adverbs is not the way to accomplish it.

For instance, if I tell you there are trees outside, you may visualize tall trees, short trees, evergreens, palm trees, barren trees, etc. If I tell you there are large, straight, green, leaf-laden trees outside, you have a clearer picture through the added use of adjectives, but you still don’t know if the trees are fragile-leafed aspens dancing in the wind or sturdy oaks with shade-bearing limbs. And that’s the key. “Fragile-leafed aspens dancing in the wind” paints a clear picture in our mind. It shows us what type of tree is outside, as does the phrase “sturdy oaks with shade-bearing limbs.” The secret is not to load up your writing with more and more adjectives, but rather to add better adjectives and/or stronger nouns. For example, just as the words fragile and sturdy are strong adjectives, aspens and oaks are strong nouns.

The same is true of verbs and adverbs. Instead of telling our readers that “Jane ran quickly down the road,” we show them the action by saying, “Jane raced down the road.” Rather than telling readers how “Mark hurriedly made his way past the entrance,” we show them by saying “Mark scurried past the entrance.” Do you see the difference? One strong verb (raced or scurried) is always preferable to a weak verb supported by one or more adverbs (ran quickly or hurriedly made his way).

The most important aspect of the observation car, however, is not the scenery as much as it is the people. If you’re riding along in a train’s observation car, sooner or later you’re going to get tired of doing nothing but staring out the window, and you’re going to start throwing spit-wads at the guy next to you and yelling, “Are we there yet?” Regardless of your age or how majestic those redwoods are, if you’ve seen a couple hundred of them, you’ve seen enough! But observing the other passengers…well, that’s another story.

Think about it. Have you ever been stuck in an airport and had to find a way to kill some time until your flight was called? What did you do? Buy a ten-dollar bag of chips at an overpriced cafeteria? Read a book? Open your laptop and jot down a few lines? Play a game or two of solitaire? Maybe. But eventually you were distracted by the many people coming and going around you, and you found yourself caught up in the mini-dramas—real or imagined—of their lives.

People-watching is contagious. We all do it, and we do it for one reason: People, for the most part, are interesting. Short ones, stout ones, tall ones, slim ones, black ones, white ones, old ones, young ones…it doesn’t matter. Each one has a story, and it’s just waiting to be told. Readers sense this, whether they’re conscious of it or not. A solo train ride is lonely and dull. Bring in a few colorful characters, and the journey takes on an entirely new perspective.

So how do you do it? How do you enable your readers to sit in the observation car of your word train and visualize not only the passing scenery but also the interesting and exciting passengers that populate your manuscript? Well, first you must know these people yourself. Have you ever tried to describe someone you didn’t know? Not an easy task, is it? But the more time you spend with a character and the more knowledgeable you become about the intimate details of that person’s life, the more accurate and fascinating a portrait you will paint for your readers.

Now I know that some of you may be thinking, Wait a minute! This people thing might work for fiction, but I’m writing nonfiction. Why do I need to put people in my article/book? For the exact reason I mentioned above: to keep it from being boring.

More than once I have been hired to work with a nonfiction author for the express purpose of breathing life into a promising but lackluster manuscript. The facts and figures were all there; the material was well organized, documented, and presented; even the author’s name gave the manuscript credibility. But the average reader wouldn’t have made it through the first chapter without dying of boredom.

My job was to write an introduction to each chapter, a human illustration to lay the groundwork for what was to come. In other words, through the use of “people situations” (either real or imagined), I showed the readers what the author was about to tell them. My illustrations were brief and to the point, but the people in my illustrations had to be memorable enough to make an impression on the readers. Of course, these people examples don’t have to be confined to the beginning of a book chapter or an article; they can be placed anywhere throughout the piece where they would be effective in illustrating a specific point. And that’s where our observation car comes into play.

Whether writing fiction or nonfiction, your characters must be three-dimensional; that doesn’t happen simply by giving them blond hair and blue eyes, or broad shoulders and dazzling smiles. What sort of personality do they have? What are their likes/dislikes, quirks, habits? How do they react in a crisis? Why should the readers care if your characters win or lose, live or die?

Take the time to breathe life into your writing through the use of strong verbs and adjectives, as well as strong, three-dimensional characters. It won’t ensure a bestseller, but it just might keep your readers from screaming “Are we there yet?” as they jump off your word train before the journey has come to an end.

Kathi Macias is a multi-award winning writer who has authored nearly 40 books and ghostwritten several others. A former newspaper columnist and string reporter, Kathi has taught creative and business writing in various venues and has been a guest on many radio and television programs. Kathi is a popular speaker at churches, women’s clubs and retreats, and writers’ conferences. She won the 2008 Member of the Year award from AWSA (Advanced Writers and Speakers Association) and was the 2011 Author of the Year from BooksandAuthors.net. Her novel set in China, Red Ink, was named Golden Scrolls 2011 Novel of the Year and was also a Carol Award Finalist; her October 2012 release, Unexpected Christmas Hero, was named 2012 Book of the Year by BookandAuthors.net. She has recently taken the position of Senior Vice President of Acquisitions for Elk Lake Publishing.  Kathi “Easy Writer” Macias lives in Homeland, CA, with her husband.

« What is Truly Passionate? » The Evolution of a Book Title