Can Deleting a Comma Make You Deliriously Happy? 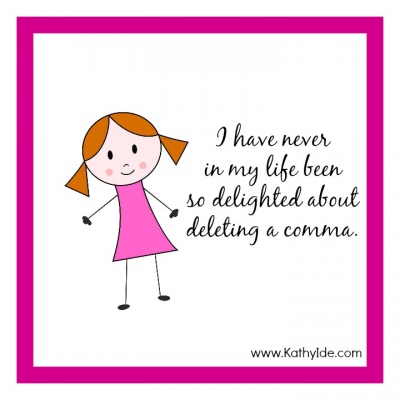 I recently experienced a tremendous thrill of excitement over taking out a comma.

Last January, my first traditionally published book, Proofreading Secrets of Best-Selling Authors, was released. I immediately added the book title to my bio, of course.

Last November, I signed a four-book contract with BroadStreet Publishing Group. (If you don’t know about my Fiction-Lover’s Devotional series, click here to read my blog about it or click on the Devo tab above.)

Last month, as I was working on my latest blog post of writing tips for the Christian Authors Network, I chuckled with glee when I got to the final paragraph. I’ve been ending my posts with this:

And when you’re ready to proofread your manuscript, consider getting a copy of my book, Proofreading Secrets of Best-Selling Authors. It reveals how multi-published authors proofread their manuscripts to avoid typos, inconsistencies, inaccuracies, and errors in punctuation, usage, grammar, and spelling.

One section of my proofreading book deals with commas. And one part of that comma section talks about “restrictive and nonrestrictive appositives.” Basically, if a noun or noun phrase that immediately follows another noun or noun phrase is “nonrestrictive” (if it restates a noun or pronoun in different words without changing or adding to the meaning of the sentence), it should be set off by commas. But if it’s “restrictive” (it identifies the noun more specifically), it is not set off by commas.

Here are the examples in my proofreading book:

Up until now, I’ve only had one traditionally published book. So when I wrote, “Consider getting a copy of my book, Proofreading Secrets of Best-Selling Authors,” I used a comma after the word book. Since I’ve now got a second traditionally published book coming out this June (and copies are already available for preorder online at Amazon, Barnes & Noble, Christian Book, and Walmart), Proofreading Secrets is no longer my only book. Therefore, the appropriate way to punctuate that sentence would be … without the comma!

I have never in my life been so delighted about deleting a comma.

Join me next week as I begin a new series of Q&A interviews with the
21 Days of Grace contributing authors.

« Chatting with Suzanne Woods Fisher » Elements of a Short Story