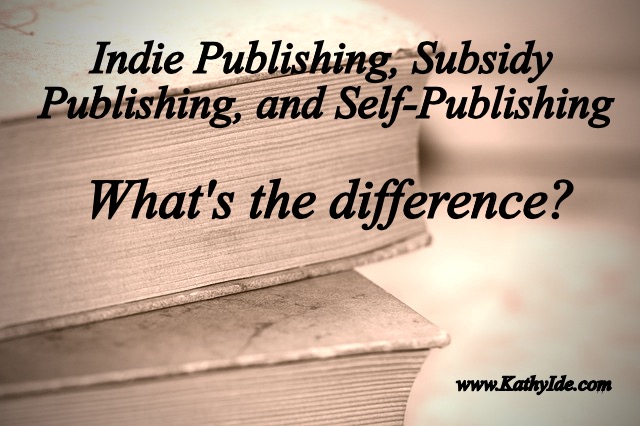 An editing client of mine recently asked me to explain the difference between indie publishing, subsidy publishing, and self-publishing. In my reply, I acknowledged that these terms can be very confusing—especially since the definitions have morphed over time.

Several years ago, the term indie meant going with a publishing house that was independent from the “Big Five”—a smaller traditional press. Back then, “self-publishing” was something people did when they thought their writing was good but they couldn’t convince a “real” publisher to accept it. For this reason, it was often called “vanity publishing.”

But then some authors started self-publishing successfully. And they began to realize that if they had a way to get their books into the hands of their target readers, self-publishing was a perfectly acceptable option. Better, actually, than traditional publishing in many ways. But since “self-publishing” had such a negative connotation, the term “subsidy publishing” came into use. Basically, it described any form of publishing a book that involved the author “subsidizing” the publishing process.

When this became popular, some authors wanted to be able to pick and choose which services the subsidy publisher would perform and which they could do themselves (or hire someone to do). For a little while, the term “co-op publishing” became popular. Also called “café-style publishing.” I don’t hear those terms much anymore. For a while, self-publishing and subsidy publishing were used pretty interchangeably.

When “indie” and “hybrid” authors realized that they could do everything a publisher could do (or hire someone for each of the tasks), some formed their own publishing “imprints.” Putting their self-designed logos on the covers and title pages made their books look like they’d been put out by a traditional house—again, avoiding the appearance of being “self-published.” (Unfortunately, many of these authors put more time, money, and effort into designing their publishing logos than getting their books well edited … or getting professional cover and interior design. Which meant that the quality wasn’t up to par with their traditionally published books.)

Wanting to make sure I gave my editing client up-to-date descriptions of these terms, I did an Internet search. I found several definitions, each a little different. No wonder my client was confused!

Based on a compilation of the definitions I found, here’s how I would define these terms as they are being used today (subject to change, of course):

Self-Publishing
The author does everything involved in publishing a book, either personally or by hiring others to do some or all of the tasks (editing, proofreading, indexing, typesetting, cover design, printing, distribution, marketing, and promotion). The book is owned solely by the author, who keeps all profits from sales of the book.

Subsidy Publishing
The author pays a company to do some or all of the tasks a traditional publishing house would do. Some subsidy publishers take on part of the cost of producing the book, but the author is required to make a significant financial investment in one or more areas (for example, purchasing a large number of copies of the book) to cover the company’s costs. No traditional publisher (with the exception of certain scholarly presses) takes money from an author to publish a book. Any publisher that requests a fee from the author is a subsidy publisher. As with traditional publishers, the company prints its name and logo on the spine of the book and the title page, and they own the copyright for the book. They pay the author “royalties” (a percentage of the subsidy publisher’s net profit, which is what they make after covering all of their costs).

Independent (“Indie”) Publishing
The author creates a publishing “imprint” and becomes his or her own publishing house. As with self-publishing, the author does everything involved in publishing a book, either personally or by hiring others to do some or all of the tasks. These authors may publish only their own original work, or they may choose to do some other authors’ books—usually for a fee.

I’m curious … how do you define these terms? If you’ve found a website that offers what you consider to be a solid explanation, please send me the link.