My Visit to The Seed Company: Part Five

The last four weeks, I’ve been posting about an invitation I received from The Seed Company to speak to their writers and editors. Though I went through a time of doubt that I was the right person for the job, God assured me that this was something He wanted to do through me. And boy, did He!

I arrived early at the Ontario airport in California, because my husband dropped me off on his way to work. As I settled in near an electrical outlet to do some editing on my laptop, I noticed another flight was about to leave for Dallas/Fort Worth. When they announced that they were looking for volunteers to take a later flight, I figured they’d put those volunteers on my flight that was scheduled to leave in a couple of hours. Sure enough, when my plane was getting ready to board, they again asked for volunteers, offering a $500 travel voucher. I immediately raced up to the counter, asked when the later flight would arrive, and called the guy who was supposed to be picking me up at DFW. He said someone else would need to come get me, but that would be OK. So I volunteered. And I was one of two people who were chosen to give up their seats. Woo-hoo!

They put me and the other volunteer in a taxi to the Orange County airport. By the time my flight left, I was pretty tired. I had figured I’d be able to look over my somewhat hastily prepared workshop notes on the plane. But I was too exhausted to think straight. And they’d put me in a window seat, and my notes were in the overhead compartment. However, I didn’t panic. Not a bit. God assured me right away that this was all about HIM, not me, and that He had this covered.

When my plane landed at DFW and I turned on my cell phone, I found I had a message from a writer friend I hadn’t seen in quite a while, who lived in Texas. She’d seen my call-out for the fiction-lover’s devotional, and instead of e-mailing me, she felt led to call. Well, I called her right back. Turned out she was ten minutes away from my hotel in San Antonio! Talk about God-timing!

Kim’s daughter, Machelle, picked me up at DFW. She and I hit it off right away, even though I was half brain-dead. She took me to my hotel, and moments after I finished unpacking, my friend Roxanne Anderson showed up. Turns out she has done exactly what the writers at The Seed Company do: take reports from people in the field and turn them into well-written articles! So along with catching up on each other’s lives, we chatted about my workshops and she gave me some great ideas to add. Way to go, God!

The next morning, Jan picked me up and drove me to The Seed Company, where I was introduced to Kim and their writers and editors. They all made me feel welcomed and appreciated, even before I gave my first workshop.

And guess what? (I’m sure you’ve already guessed.) My talks went great! The people really seemed to get a lot out of what God had put on my heart to present. They loved my hands-on workshop. And I think my talk about writers and editors working together as part of the body of believers God put together for the incredible work being done at The Seed Company might just have helped them be able to get along better as they go forth. 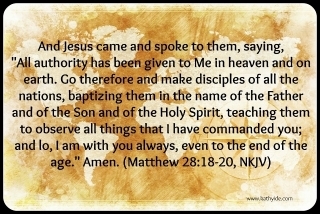 God even put two generous scoops of frosting on this beautiful cake. I had planned to fly to my son and daughter-in-law’s house in Austin on Thursday after my last talk, but Jan offered to drive me there on Friday, so I got to stay till the end of the conference. (And enjoy getting to know Jan and some of her family a bit more on the drive.) And just as Jan was pulling out of The Seed Company’s parking lot, Kim stopped by the car and told me she wanted to put me on retainer to do regular writing and editing for them! I am SUPER excited about this opportunity, because these people are doing INCREDIBLE work toward fulfilling the Great
Commission … the last thing on Jesus’ heart before He ascended into heaven. What an honor to be an ongoing part of that work!

Now, in case my previous posts haven’t encouraged you to do so already, I would REALLY encourage you to check out this amazing organization. The work they’re doing is truly incredible. So before you go off to do something else, click on this link to go to www.theseedcompany.org. Find out for yourself what they’re accomplishing there, and then ask God if He might want you to get involved in some way. I know, your schedule is already busy, right? But trust me … if this is something the Lord wants you to do, He will make time in your schedule, and He will abundantly bless you for it!