The OCC Writers’ Conference Has a New Director 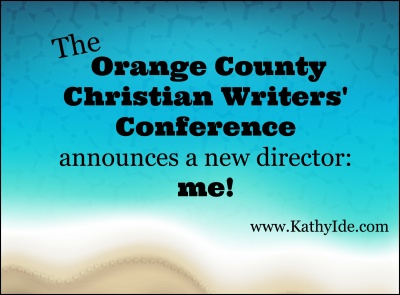 The Orange County Christian Writers’ Conference in Southern California has a new director: me!

A few weeks ago, Antonio told me that he and his wife, Gwendolyn, had been called into a ministry position that will take up a good portion of their time, and he asked if I would consider being the new director for the Orange County conference. To be honest, I was taken aback. The idea had never occurred to me. But Antonio told me he had observed my interaction with the faculty at the conference, and he had prayed about this decision, and he was confident that God was leading him to ask me.

He also assured me that he would be co-directing with me for the remaining months leading up to next year’s conference, gradually transferring responsibilities to me but not disappearing out of the picture altogether.

As I prayed about this, I sensed God leading me to accept. So I did.

It is certainly an honor, but it’s also a tremendous responsibility. I would greatly appreciate your prayers that God will work through me in this new position to accomplish His will for all those who come to the conference: faculty, attendees, volunteers, and special guests. I could not do this without faithful prayer support.

All faculty members will be teaching workshops and will also be available for one-on-one consultations.

I hope you will consider coming to sunny Southern California next April to join in on the fun! Details will be posted at occwf.org as soon as we get them nailed down.

If you live in the area and would like to help out with the conference as a volunteer, please let me know.

« The Evolution of a Book Title » Forbidden Doors