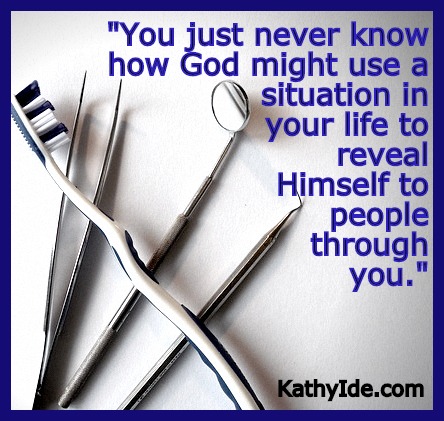 ou just never know how God is going to use the little details of your life to bring Him glory.

I had a dental appointment scheduled for 11:30 on Tuesday. Knowing I’d be deeply involved with work at that time, I set an alarm to remind myself when it was time to leave. Apparently I set the alarm wrong, because it didn’t go off.

I happened to look at the clock right at 11:30. I quickly called the dental office and asked if I should still come in. They said yes.

When I arrived a half hour late, I apologized … and then gave the receptionist a copy of 21 Days of Christmas, the second book in my Fiction Lover’s Devotional series, which just came out. She was delighted. I’d also brought in two more copies: one for the dentist and one for her assistant. My dentist is, I believe, Buddhist. Her assistant, I think, is Catholic. And the receptionist seems pretty New Age humanistic. I’ve been going to this dentist for years, and I don’t believe anyone in the office is a born-again Christian. So I had hopes that perhaps reading my book might bring them a step closer to Christ.

Diana eagerly went to the back to distribute the other copies. I took a seat in the waiting room and started working on a manuscript I’d brought with me to proofread.

A few moments later, Diana returned to the front desk with a patient. As they talked, I overheard the patient ask Diana to “say hi to Richard for me when he comes in.” Diana said, “His wife is right here,” and she pointed to me. The patient turned around, and I recognized her as a woman from my husband’s work. Nancy had just been laid off from her job a few days ago. We greeted each other warmly.

Diana started talking about the time when I got laid off from my job. Though that was almost twenty years ago, she said she remembered very clearly the look on my face and the words that I said. “I expected you to be upset that you’d lost your job. But instead you were totally calm. You just said that you were going to do something you loved. And now look!” She held up 21 Days of Christmas, showing it to my husband’s ex-coworker. “She did it. She has a book!”

Now, I’m not one of those people who just naturally starts sharing the plan of salvation every chance I get. I’m actually more likely to think about things I could have said well after the opportunity has passed. (Guess that’s the editor in me!) But that moment provided such a natural conversation starter, I couldn’t resist.

I explained that the reason I was so calm about losing my job was that I’d prayed about it. God gave me peace and assured me that He had a plan for my life and that I could trust Him with my future.

Nancy’s eyes lit up. “I pray too! I pray every day. I ask God to lead me and to help me become whatever He wants me to be. It’s about His will, not mine.”

I had met Nancy a few times at my husband’s work, but I never realized she was a believer. As she started to leave the dental office, I told her I wanted to give her a copy of my book. I walked her out to my car. She was really excited to get a copy of 21 Days of Christmas.

As I walked back into the dentist’s office, I realized that my attitude about my job loss all those years ago had had a tremendous impact on the receptionist. Diana saw something in me that surprised her, something different from the “normal,” something that she remembered even after all that time. I pray that God will use my faith and trust in Him, which she witnessed, to draw her closer to Him.

Then I had another thought. Maybe that’s why I was a half hour late! If I’d set my alarm properly, I might have missed this chance to see Nancy and encourage her, and to talk to Diana about my faith as part of a natural conversation.

You just never know how God might use a situation in your life to reveal Himself to people through you.